The symbology of traditional tattoos 2/2 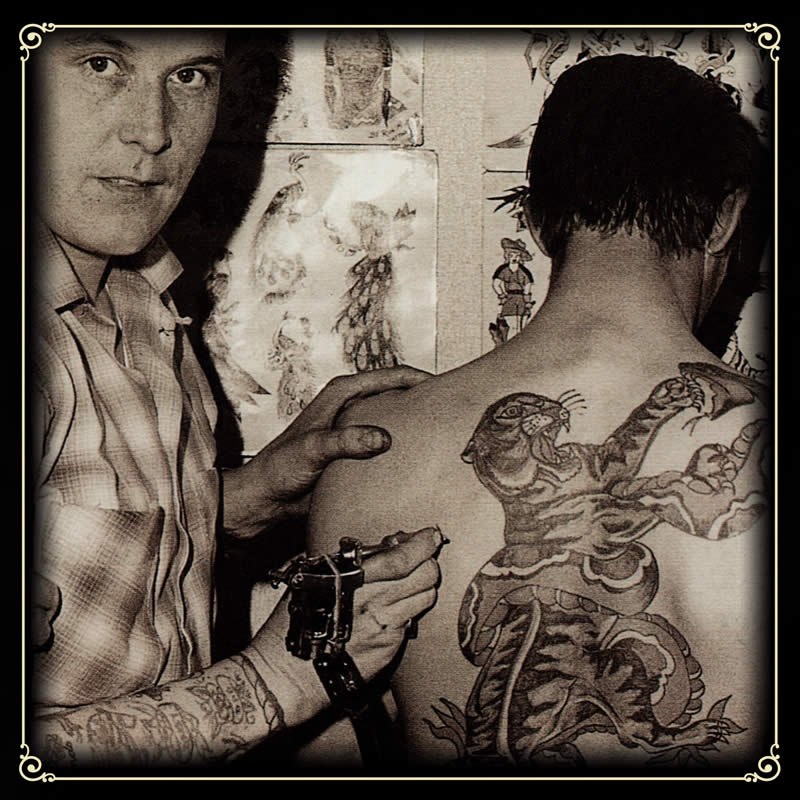 22 Feb The symbology of traditional tattoos 2/2

What do these classic tattoo symbols mean?

Tattoos include all kinds of symbolisms from the most ancient to the most recent ones. They can be universal or have a completely personal meaning. We will explore the origin of some of the most popular motifs.

The rudder, or the need to find the North 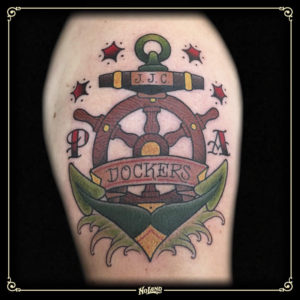 The history of tattooing is full of elements extracted from naval iconography. It is an inexhaustible source of ideas related to the concept of travelling, destination and all kinds of existential issues.
The rudder is one of the most represented marine objects since it permits many different interpretations linked to the real function of this tool: to steer a ship in a certain direction. It can be the metaphor of the willingness to find a path, or to turn your life around. For other people, it is a manifestation that they feel in control of their own destiny, or at least aspire to it. The ability to right the boat in the middle of a storm, or to steer it towards quieter waters is also a sign of character and desire to find stability.

Some tattoo a rudder next to a skull in reference to pirate boats, others combine it with an anchor or other nautical elements with no other intention than to express their personal connection to the sea. Other usual complements of rudder tattoos are waves and lighthouses (other objects with great metaphorical and visual power).

Boats, symbols of strength and resistance

Back to the naval theme. Sailboats, pirate ships, and even paper boats are some of the most represented items on the skin throughout the world. In the past they were considered motifs of the male gender, but today such distinctions are out of place, and there are more and more women who decide to immortalize some kind of boat on their skin.

It is said that professional sailors only tattoo a boat with fully deployed sails if they had crossed Cape Horn, one of the toughest sea crossings. Some people express this way that they have overcome a great difficulty. On a more metaphorical level, ships represent the idea of independence, courage and honour.

Undoubtedly, boats refer us to the idea of adventure and risk; to journeys we know where they start but we don’t know how they will end. They are symbols of strength, determination and the will to fight against adversity. In fact, in marine circles the tattoos of ships and anchors are considered a kind of lucky charms that guarantee that the crew will return to their home safe and sound. It is not uncommon to find boat tattoos accompanied by the phrase “Homeward Bound”.

The meaning associated with paper ships or origami is quite different: it usually refers to childhood memories.

On a purely artistic level boats are very interesting objects. The sails give a lot of power to the drawing, and can be complemented with contextual elements like clouds or a line of the horizon. Of course, pirate flags, skulls, anchors, seagulls, nautical stars, rum bottles or compasses are a perfect to match to these kind of tattoos, which are usually medium or large in size.

Europe is probably the continent where tattoos based on nautical motifs are more ingrained. Legend has it that their origin could be find in the expeditions of Captain James Cook to the islands of the South Pacific in 1772, when sailors came into contact with Maori tribes whose members had their skin tattooed. Therefore, the members of the crew of James Cook would have been the ones who initiated the famous tradition of tattooing among the professionals of the sea, that reached its high point in the 30s and 40s of the 20th century.

As we stated at the beginning of this article, every person can give their tattoo the unique and personal meaning they wish. However, it is interesting to know what is the interpretation given to some objects in the world of sailors, explorers and fishermen:

Swallow: some sailors tattoo this bird every time they sail 5000 nautical miles.

Anchors: they indicate that the sailor has reached the rank of boatswain. In the past, wearing an anchor tattoo symbolized having crossed the Atlantic Ocean.
Dragon: symbolises that the sailor has served in Asia.
Galleon: means having sailed the Cape Horn.
Golden dragon: symbolises that the person has navigated beyond the International Date Line.
Harpoon: identifies the sailor as a member of a fishing vessel.
Hawaiian woman: means that the tattooed person was based with his ship in Hawaii.

On the other hand, before tattooing a boat randomly, you might be interested to know the characteristics that differentiate one type from the other.
For example, a 16th-century galleon was used both for transport and trade, as well as for war purposes. It was used principally in Europe, especially by the Spanish, who destined it to their commercial trips to the colonies of the West Indies due to its great carrying capacity and manoeuvrability.

As for the pirate ships, they were designed to assault other boats on open sea, to loot them and turn their crew into slaves.
Fishing boats can be depicted either with sails or with oars. Within these we can find the whaling ship, like the one that inspired Herman Melville’s novel Moby Dick.

The Rock of Ages 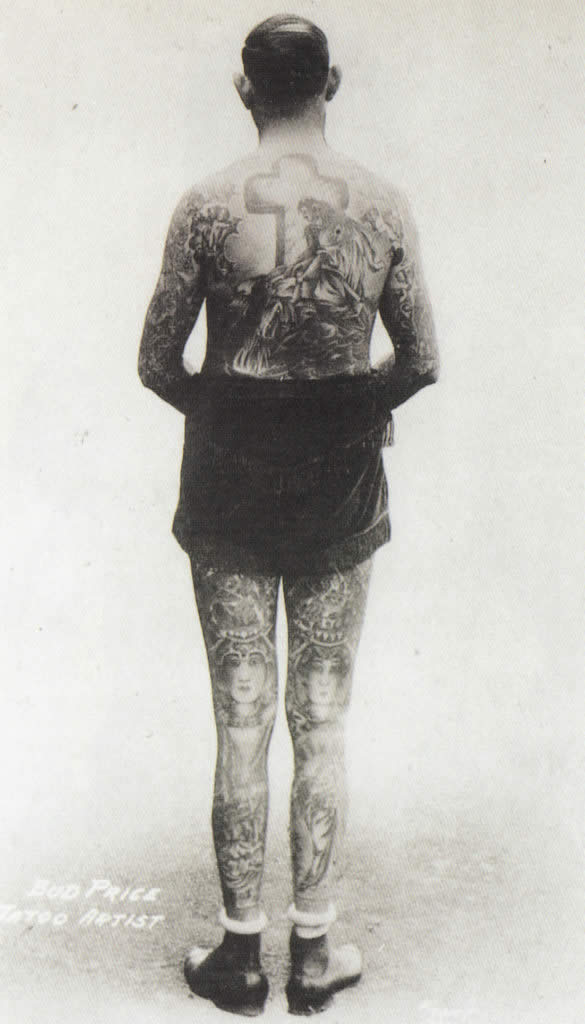 We´re talking about another nautical-inspired tattoo. The image Rock of Ages or Sailor’s Cross is more than a century old, and it usually depicts a kneeling sailor in front of a solid stone cross; it is a gesture of religious reminiscence that refers to the desire to live our lives in the right way. It is very common to see it tattooed on the forearm, thigh, or even covering the entire back.

It is said that there was a belief among sailors that wearing a Rock of Ages on the back could spare them a disciplinary sanction or have them punished less severely, since no believer would whip an image of Christ.

The origin of this graphic icon so widespread in the tattoing world seems to be in a mid-nineteenth century painting by the German painter Johannes Oertel entitled “Saved, or an Emblematic Representation of Christian Faith”, which was later reproduced throughout the world under the name of “Rock of Ages”. Over time, the dramatic power of this cross made it to one of the favourite elements of tattoo lovers.

The Rose of No Man’s Land, a tribute to the nurses of the Red Cross

It is a traditional tattoo icon which has its origin in a song that emerged during the campaigns of the First World War. It is a drawing that portraits a nurse of the Red Cross, and refers to the heroic role these volunteers played by saving the lives of thousands of men. To immortalize these guardian angels, many soldiers decided to tattoo their faces on them.

Roses: each colour a different meaning. 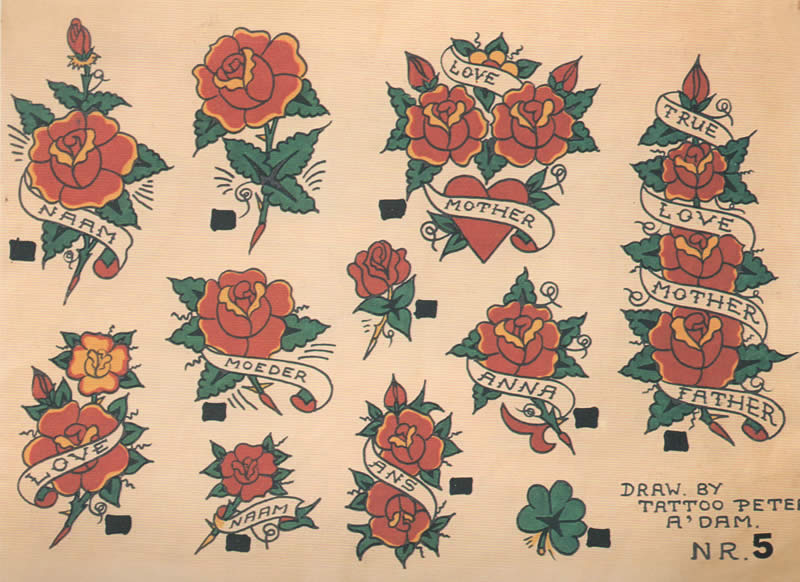 This flower, usually associated with the idea of love and passion, can carry several meanings depending on its colour for example. A very dark rose can symbolize passion or eroticism, while a lighter one peace and chastity. Yellow roses signify friendship or mature love, and the purple ones enchantment. Pink roses mean sweetness, the blue and golden ones can indicate the search for the impossible, and the black ones are often used as a symbol of loss or death. If we give them thorns for instance, we can enhance the idea of suffering associated also with romantic love, or use them to warn that behind a soft appearance there is a strong personality.

The snake, a mysterious symbol. 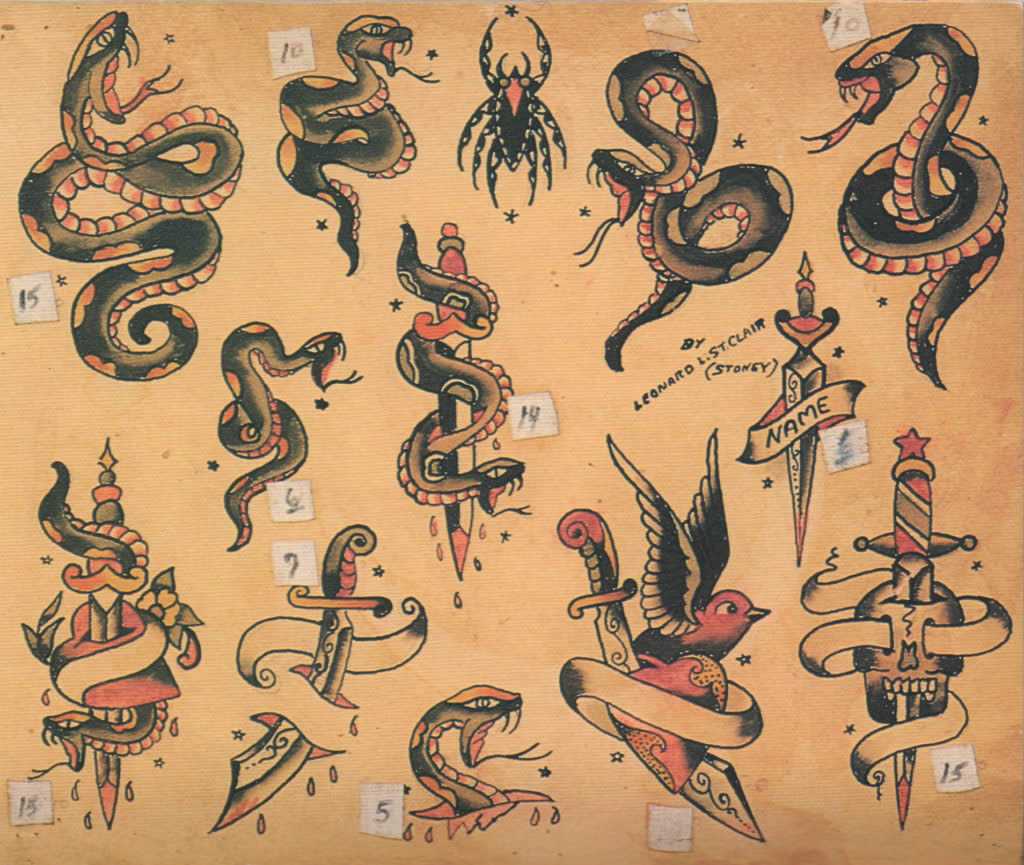 The symbolic universe of the snake is widespread and is extended to all kinds of cultures. We should not forget the role it is given in the biblical passage of the Garden of Eden, although this reptile is also associated with the moon and the sun, water and fire. Therefore, it is a rather useful element, when we would like to depict the duality of two concepts or the search for balance within ourselves. In fact, the snake we see on pharmacy signs refers to the idea of healing, rebirth and protection. 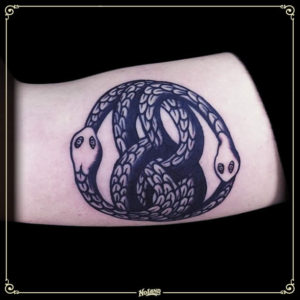 In Celtic culture serpent tattoos were representations of secret knowledge of nature, cunning and transformation. Currently it is believed that this symbolism of the serpent came from their observations of the European viper.
Another symbolic meaning of snakes is related to the ability of these animals to transform themselves by changing their skins and show a renewed aspect.

Snakes moreover have a mysterious halo around them, perhaps related to their habit of disappearing during the coldest months and reappearing stealthily when the sun is warm again.

In Sanskrit the word to refer to serpents is naga. The nagas were demigods associated with the water element and therefore linked to the concepts of emotion, love and movement. They were considered wise female entities. Nevertheless, in some ancient texts the portrayal of nagas tended to be negative. In those texts they played the role of the persecutor of all the creatures, had virulent poisons, great power, excess of strength and always tried to bite other creatures

The use of two snakes is also quite common, and it can mean the connection between two mystical forces, the integration of the opposite, or the union with the divine. 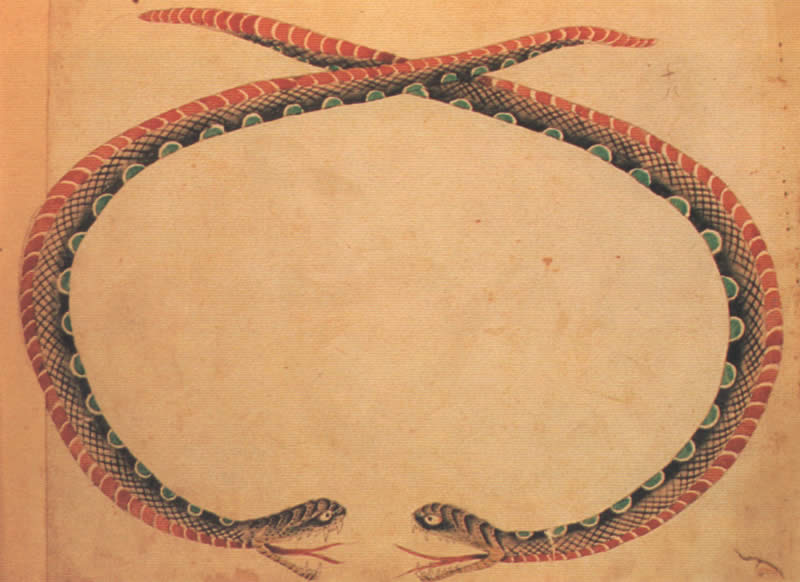 On the other hand, according to masonic literature, the image of an ouroboros (a serpent swallowing its own tail) symbolizes the infinite cycles of life or an inextinguishable passion. 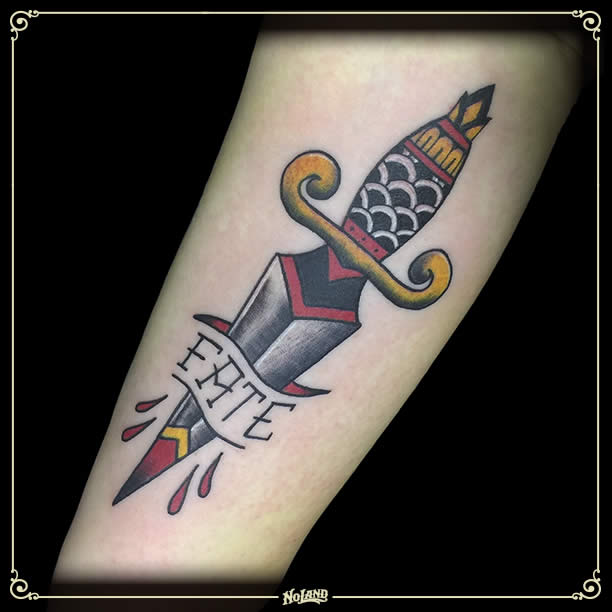 The dagger is another one of the most classical elements of the tattoo world. It has countless versions, and it usually signifies sacrifice, power, strength, or danger. Some people wear it on their skin to remind themselves of a past crisis that they had had difficulty to overcame.

It’s rather common to see daggers accompanied by other features like flowers, hearts, skulls, and snakes. Sometimes a bloody dagger is drawn to enhance the idea of threat and death. Because daggers were weapons easy to hide, they were quite often used by murderers and traitors. The dagger therefore is an ambivalent symbol: it can represent both the hero and the villain. Actually, in the world of prison tattooing a dagger crossing a skull identifies a murderer, and stabbed heart can refer to revenge or jealousy.

The horseshoe and luck 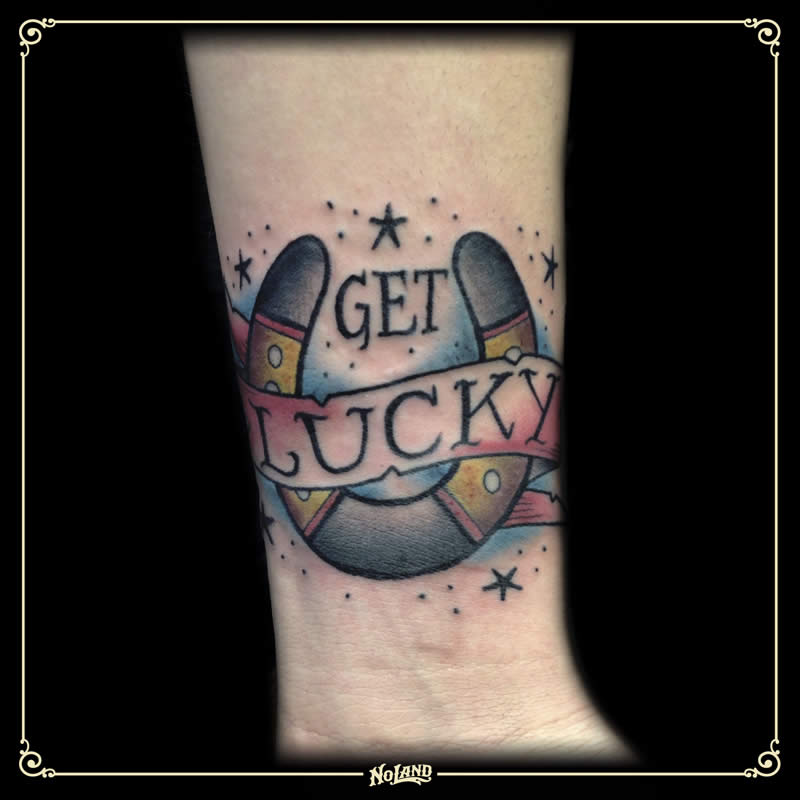 The horseshoe is perhaps the most universally known amulet of luck and protection together with the four-leaf clover and the dice. Indeed, in North America it’s not unusual to find horseshoes on the doors of houses and barns. Maybe because horses are in themselves signs of prosperity.

The lighthouse, a ray of hope

In addition to an undoubtedly aesthetic appeal, lighthouses carry highly positive meanings. They can refer to this ray of hope that enlightens us even in the darkest moments of our lives. A light that guides us to the right path when we have lost the way and think that we are drifting in the vastness of the sea. It is therefore a sign of protection and security.

If you would like to know more about the meaning of the tattoos, go to our post: “The symbology of traditional tattoos [1/2].“