W.T Norbert, a tattoo artist with more than 20 years of experience and highly qualified in neo traditional style came to No Land in October to do a guest spot. His career in tattoo world is long and wide-ranged. He began to tattoo in 1993 while he was studying Fine Arts at college. 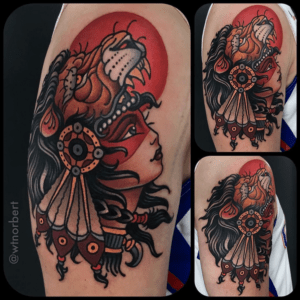 d his first tattoo store “Perun” in Poland in 1998. Music is also his big passion, so he closed down his studio and moved to Berlin – where he went after some punk music projects (The Nothings, The Assassinations). He worked at the legendary No Brain No Pain Parlour and Gallery. His good work got him traveling a lot doing guestspots in popular studios such as Henning Jorgensen ́s “Royal Tattoo” (Denmark)

In 2008 he moved out to Sydney. He has always worked in reference studios such as Kaleidoscope, Inner Vision Tattoo shop and the always interesting Hunter and Fox Tattoo.