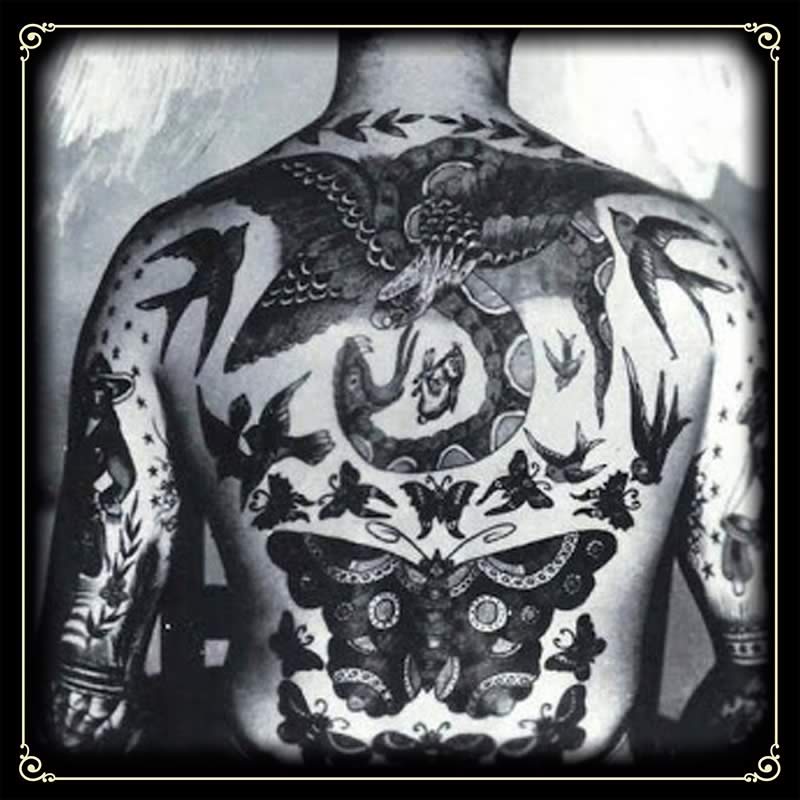 14 Jun The symbology of traditional tattoos [1/2]

Nautical tattoos date back more than 300 years, although they are among the most emblematic and highly demanded styles in contemporary tattoo culture.

Sometimes used by sailors to indicate rank, experience, or memories marked forever on the skin of distant lands to which they had travelled. Today these archetypal images remain the most popular and timeless designs to display on the skin.
We’ve all seen arms adorned with swallows, boats and growling panthers, but …

What is the meaning behind these tattoos?

There is a hidden code beyond the bright colours and thick lines of the traditional nautical aesthetics. Stories told through images which, although now shifted from their original historical and social context, continue to have a life decorating the skins of new generations.

Many of the designs are based on the images that were part of the world of sailors: anchors, ropes, rudders …

These objects took totemic and even mystical meanings, because they were tattooed on the skin.

The purpose of this blog post is to decode the mysterious language of some of the traditional and old school designs. A brief look at the meaning behind the symbols, superstitions and talismans that form one of the richest and most referenced Western tattoo styles.

The meaning of the anchors: 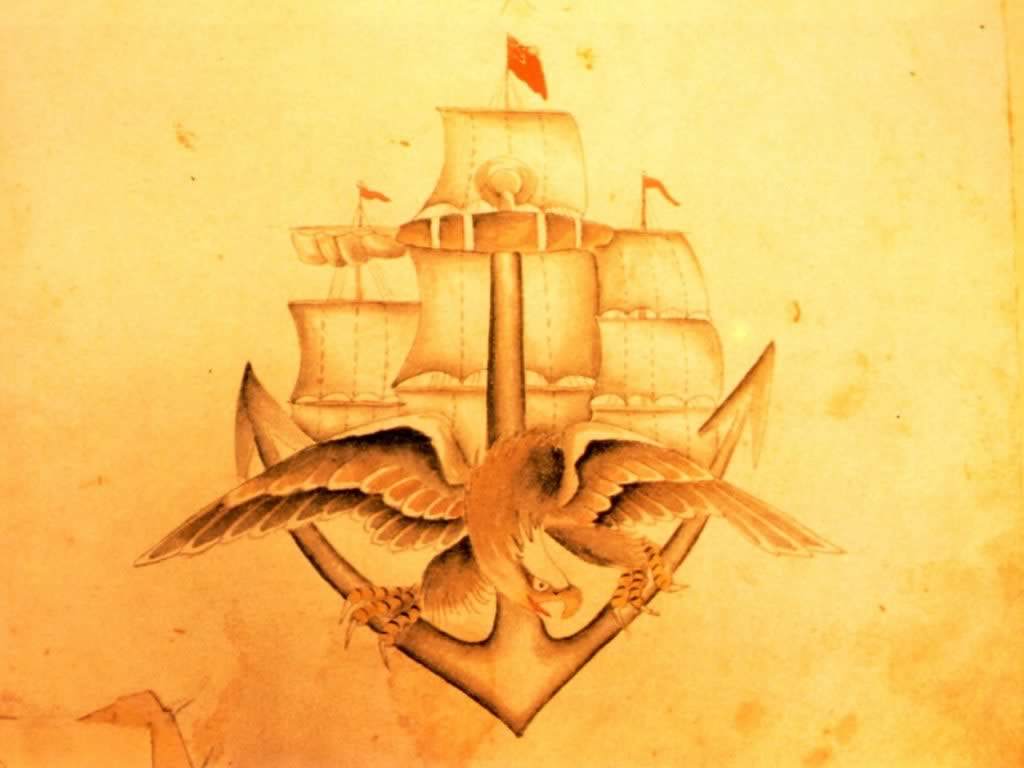 The anchor is one of the most popular traditional tattoos, originally used as a praise by sailors who had crossed the Atlantic, or by those who had achieved the prestigious rank of boatswain or chief on a ship. Also, in the 1900s the anchor was often tattooed to show the lineage of marine servitude within a family.

Although most often associated with the navy, its origins go back much further than that.

The anchor is undoubtedly one of the oldest symbols dating from 400 AD, when it was mainly a Christian symbol preceding the cross.

The anchor as a visual symbol however has abundant metaphorical meanings. Its main purpose is to protect the ship and the crew from an unsafe destination floating in dangerous waters. For this reason, we interpret it as a symbol of stability which represents everything that is kept safe and grounded in times of instability.

The symbology of the swallow: 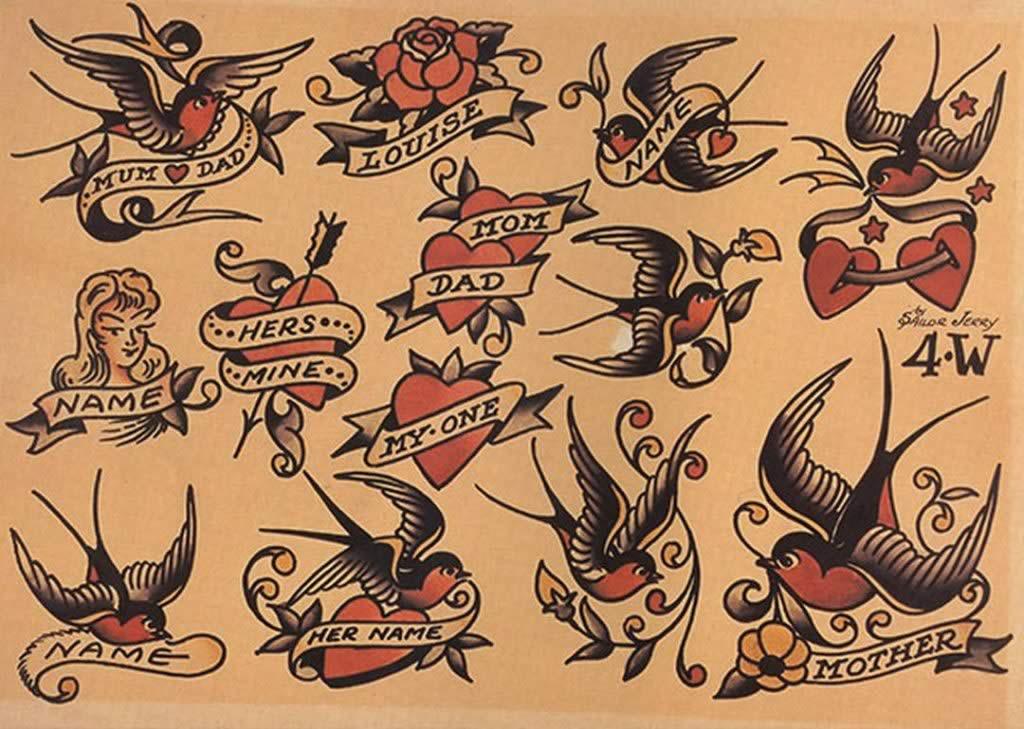 This humble sea bird was traditionally tattooed in pairs: the first one before a sailor embarked on the sea and the second upon his return to the mainland.

For this reason, it is seen as a tattoo symbolizing the promise to return home, a protective talisman for safe travel.

The superstition of the sailors says that if a soldier dies in the sea, his soul will be taken to heaven by these birds. An anecdote that can explain why the swallow is a popular motif for those who lived in the turbulent seas, and as such, a symbol of hope and freedom in the face of uncertainty.

In addition, sailors who had lost a friend or companion at sea were tattooing the image of a swallow with a dagger stabbed through its chest.

The swallow was also often tattooed to show the sailing experience of the sailors. Commonly used by those who had travelled more than 5,000 nautical miles.

The symbology of the eagles: 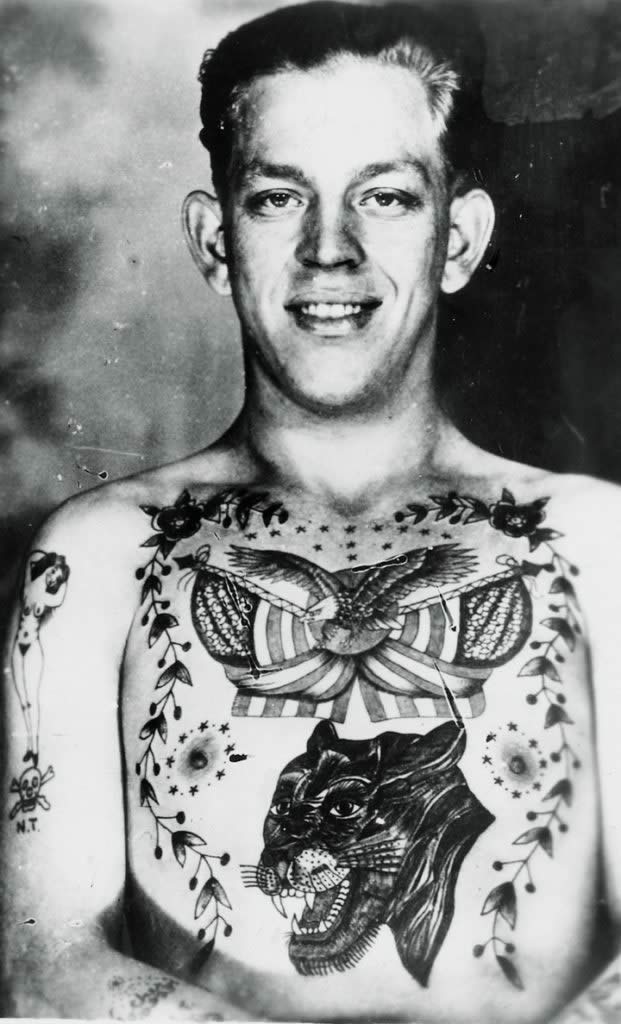 The eagle is a proud, audacious and ferocious bird mainly used to symbolize the United States, homeland to many of the sailors who were wearing this design. It’s because this animal is used as an icon in the American culture on buildings, coins and bills.

As a tattooed motif, on the one hand it represents honour and courage, because for centuries the eagles have been perceived as bold and independent birds. Also, in their natural habitat they are fiercely territorial and would fight to death to protect their nest. Therefore, on the other hand it is also understood as a symbol of patriotism.

It is also important to note that, although these tattoos were favoured by American sailors, it is common for soldiers from other countries to tattoo an eagle combined with the colours of the flag of their country.

The meaning of heart tattoos: 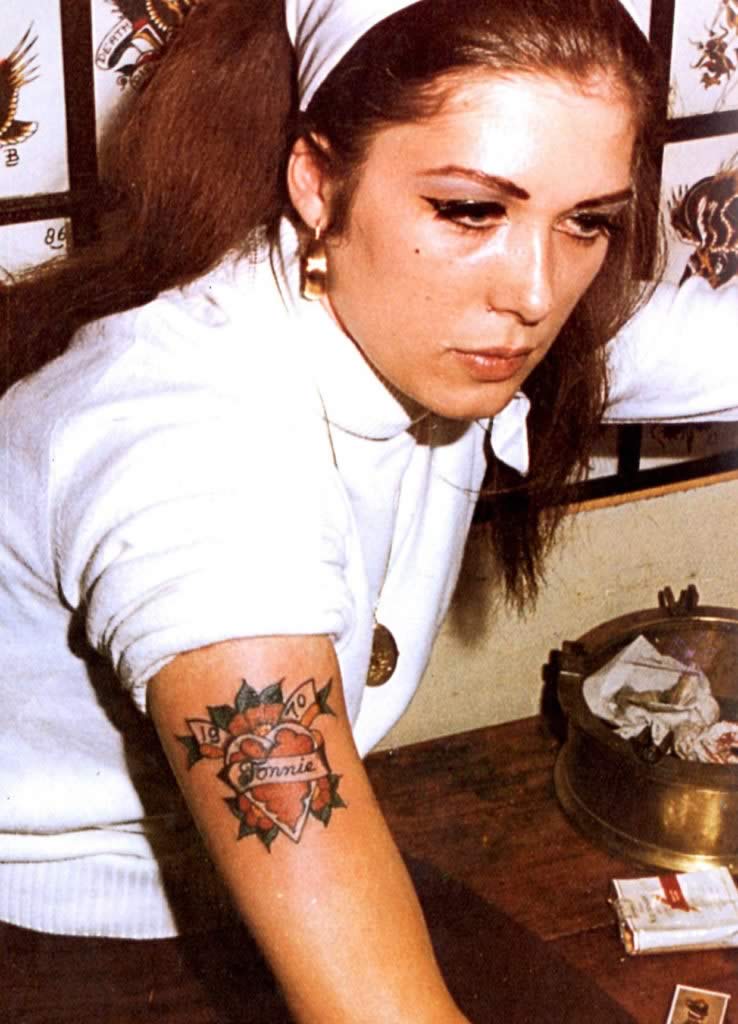 The heart is a universal symbol of love and affection, making it one of the most iconic and widely tattooed designs throughout history. A sailor who was about to embark on a long trip often tattooed it to represent his loved ones, to always carry them with him.

There are hundreds of variations on this iconic tattoo. Often a simple red heart would be accompanied by a parchment with the word ‘Mama’ or the name of a lover. But it is also important to remember that with love there is also heartbreak.

Sailors often tattooed a heart pierced with a dagger to indicate a tragic romance or an unfaithful lover.

Another traditional design is the sacred heart. This tattoo consists of a burning heart usually wrapped in a crown of thorns with a cross on top of it. It is above all a religious design. The sacred heart is a devotional name used by some Catholics to refer to the physical heart of Jesus Christ as a symbol of divine love.

The nautical star and its mythology: 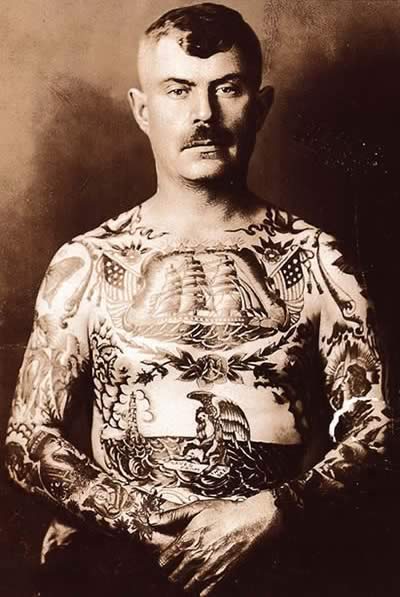 The tattoo of the nautical star was used by the sailors to represent the North Star used for navigation on the sea, as it was believed that the brightest star was the safest and fastest help for sailors to guide the ship.

That is why the nautical star tattoo is a lucky talisman for sailors to stay on track and return home safely when their travels end.

The combination of the black and red colours of the star is derived from the wind rose and the traditional nautical charts used by sailors.

Many who survived dangerous journeys or who had near-death experiences on the sea were consecrated with two nautical stars tattooed on their chest, one in red and the other in green, the colours referring to the port and starboard, the two ends of the ship.

The words Hold Fast were the lucky motto for sailors at sea. Often tattooed on the knuckles, this phrase served as a reminder to hold the course of the ship and fast so as not to be thrown into the sea during the storm. This is not just a protective tattoo but, as the nautical star, it also has a symbolism based on staying on course with life. For this reason, it is perhaps one of the most popular motifs in the current tattoo culture.

Pin-up girls – the symbology behind these classic beauties: 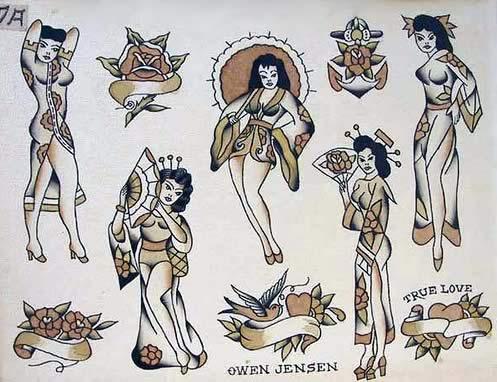 As sailors used to spend most of their time at sea away from their loved ones and spouses, the pin-up tattoos represented beautiful women serving as constant reminders of the women they loved on land. Pin-ups were often depicted naked on the skin of the most intrepid navigators. In1909 however the navy banned vulgar or obscene tattoos, including bare pin-ups.

As a result, many tattoo artists had to cover up these tattoos by adding clothes to naked pin-ups, so that they could be accepted under the rules of the navy.

The meaning of the mermaids: 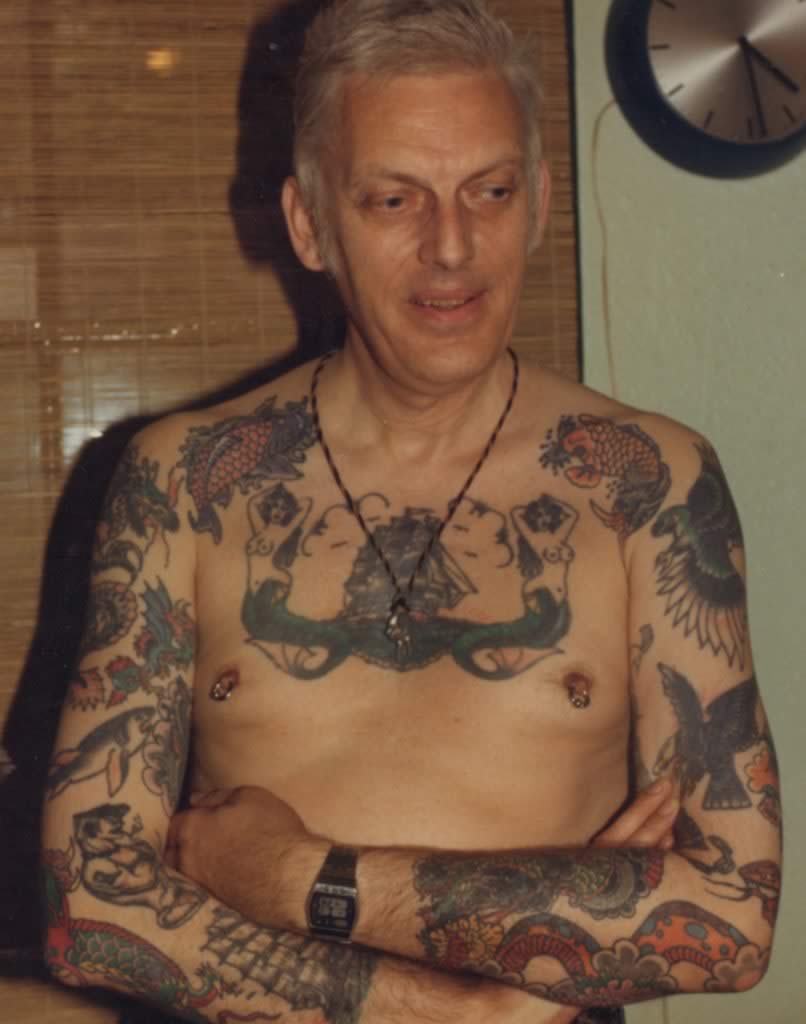 Like the pin-up girls, mermaids also represent female beauty, but with a double meaning: as legend has it, sirens often attract sailors to death in dark waters. The tattoo of a siren can be interpreted as a constant reminder not to get lost on the way by the beautiful and mysterious, be it the sea or a lovely woman.

As ancient goddesses, a magic duality is contributed to the mermaids: the provide water for the crops, but they also deliver waves and deadly storms that result in destruction and loss of life.

It is said that a siren tattoo can help you capture this essence of their character and, of course, the danger of attraction.

The meaning of the dragon tattoos: 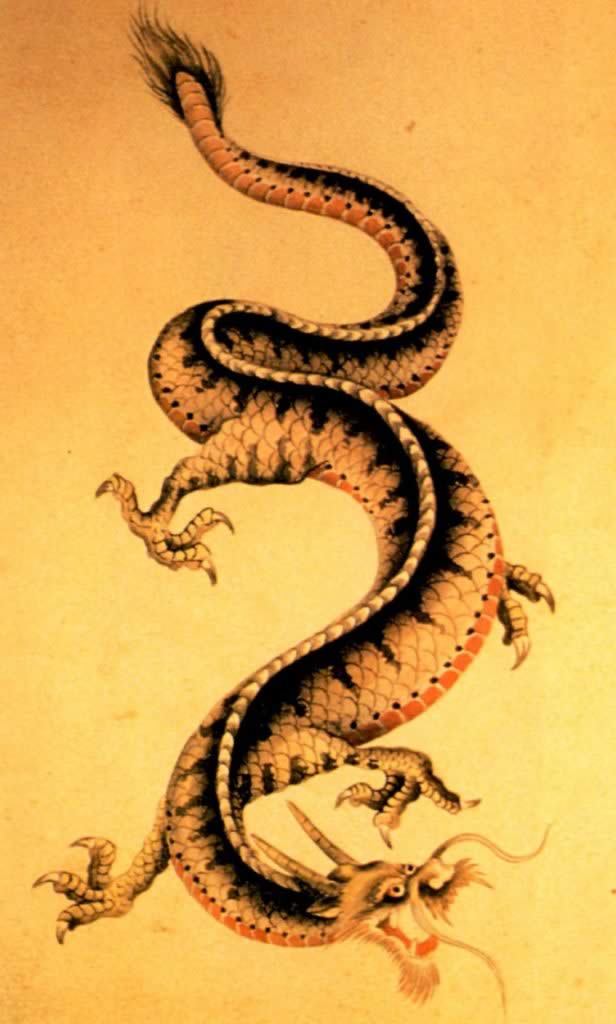 Sailors who had completed the long trip to China by sea were presented with a tattooed dragon as a permanent reminder of their hard journey.

Although this meaning does not apply to contemporary society, dragon tattoos are still a popular choice in traditional western, tribal or traditional oriental styles. Dragons represent strength and bravery, making these mystical creatures one of the most popular tattoos in history and culture.

While this is not an exhaustive list of all traditional nautical tattoos, it serves to show the historical influence that has made this style a reference point in contemporary tattoo culture. As we have seen, many of these designs remain popular outside their original historical context, passing on their legacy to all generations until the 21st century.

We would like to highlight some of the pioneers of the subject such as Maud Stevens Wagner, Owen Jensen, Gib “Tatts” Thomas, August “Cap” Coleman, Nora Hildebrandt, Lyle Tuttle, Bert Grim, Percy Waters, and Sailor Jerry, whose iconic flash have served as reference points and has influenced many contemporary tattoo artists who specialize in traditional style.

We can only hope that the visual simplicity and complex mystique of these designs continue to adorn the notebooks and the skins of future generations.

If you would like to know more about the meaning of the tattoos, go to our post: “The symbology of traditional tattoos [2/2].“