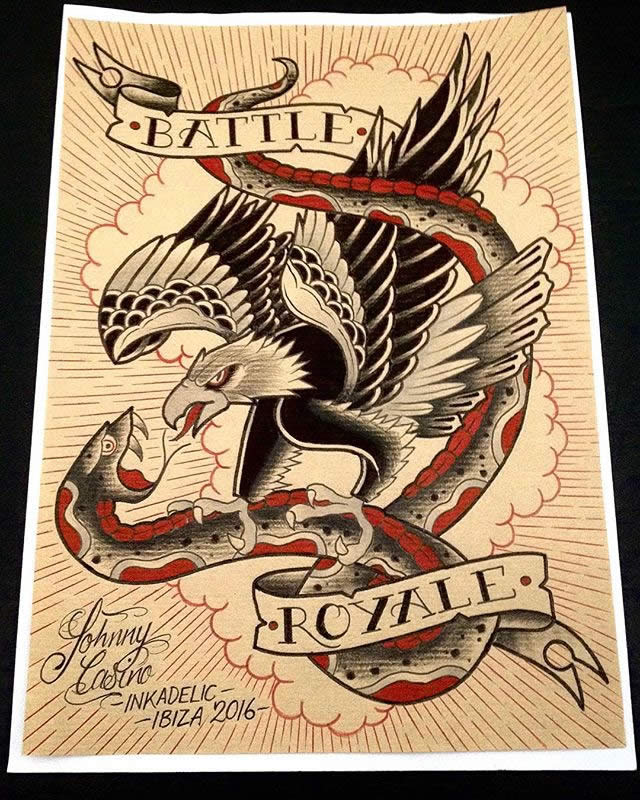 First time Johnny hold a tattoo machine in his hands was in January 1997 in Sydney, Australia, to tattoo his mentor and friend, The Great Cosmic Commander. Cosmo told him: tattoo the southern star on my skin to find out if you got the thing or not.

And so it was. Johnny raised the money to buy a flight ticket to Philadelphia next April.Johnny spend the 97 and most of the 98 learning the in and outs of tattoo world in a little traditional old school style store, Kadillac Tattoo. After been tattooing for two years in America, Johnny got back home in Sydney in November 98 to work in one of the most popular stores in Australia, the Tony and Brett Cohen family store, The Illustrated Man.

When Johnny wasn ́t out touring Australia, America or Europe playing with one of his rock and roll bands, he worked at the Illustrated Man six days per week, sometimes 12 hours per day. This was his routine since December 98 till May 2015. In the meantime Johnny also worked as a guest artist in stores all over Australia, New Orleans, San Francisco or Philadelphia till he moved to Denia, Spain.During all these 20 years Johnny covered all tattoo styles, since old school or Japanese to Polynesian style or New School. You can be sure Johnny ́s got a clean, bright and strong style made for last in time.

GET SOME JOHNNY CASINO TODAY FOR A BETTER TOMORROW.

Sorry, no posts matched your criteria.